Where the BenQ EW3280U immediately impresses is with its colour accuracy and vibrance, making it perfect for firing up 4K content.
BenQ EW3280U 32" 4K HDR Display Review
AusGamers Darksiders 2: Death Lives Preview
Post by Steve Farrelly @ 12:18pm 25/01/12 | Comments
AusGamers was recently invited out to an exclusive preview event in San Francisco for Darksiders II. Read on for our thoughts...


I suspect the fine folk at Vigil might be hiding something special in Darksiders II. Not that what I’ve seen of the game since E3, 2011, right through to an exclusive preview event AusGamers was invited to in San Francisco last week, isn’t already tantalising enough, it’s just that each and every time we’re really only seeing the smallest fraction of what I definitely know is a large game. I know this because I played the original Darksiders to death.

Ironic then, or maybe just seguenient, that its sequel should star the oldest of the Four Horsemen of the Apocalypse - Death. Though “sequel” may be a stretch at best when allotting this gem a place next to its predecessor. Rather, Darksiders II ought to be called Darksiders Parallel, as the events within take place alongside those you played out with Death’s brother, War, the first time around. It's all a bit soap-operatic really, and full of brotherly love, leaving a lot of open questions regarding a place for the other two Horsemen in the opus, but getting any of that out of Vigil proved nigh on impossible. 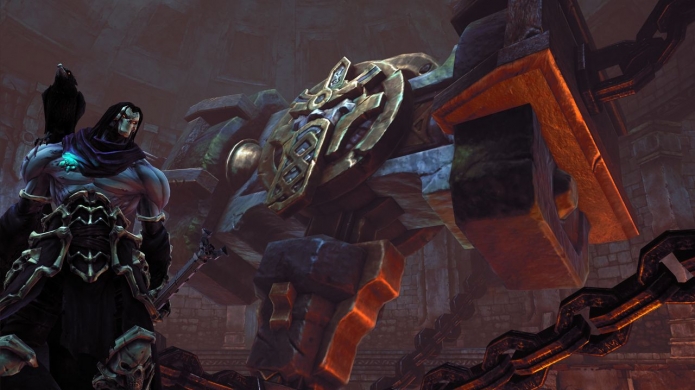 None of that matters now though. At least not for the purposes of our demo in San Francisco. What matters is that we’re seeing the action differences between War and Death, and learning that this awesome-looking dungeon he’s trouncing through is nothing but a small side-quest; something anyone who plays the game can consider a waste of time if they like, and completely ignore in the grand scheme of things.

Which is yet another seguenient point, and brings my intro full circle, because apparently Darksiders II is twice the size of the original, and the end of our demo (the bulk of which I’ll get to shortly) teases this idea with a hammer so big, Death can lithely walk along its head. Apparently it also has an owner.

So the demo then, prepares us for some of the more fundamental changes the team have made to the series, beyond the grandiose, and in a territory that won’t spoil the story proper. Last year we spoke with the game’s creative director, Daniel Isaac, who mentioned something in the way of Diablo being one of the team’s favourite games to play and that Darksiders II may very well follow the Vigil tradition of bearing hearts upon sleeves. This was confirmed then with the revelation the game would come with a full loot system that allowed for players to deck their Death character out in whatever equipment they wanted, and that everything looted in the game would have an RPG-like stat set. There’s also still murmurings of a loot trading component tied in some way shape or form to “social networking”, but alas, the team would reveal no more than that.

With a full stat set for loot, it’s also no surprise the game comes with a more RPG-esque combat system that arguably compares (and potentially betters) to the forthcoming Kingdoms of Amalur: Reckoning in terms of visceral engagement tied to traditional RPG mathematical rules (though it’s obviously not nearly as varied given the lack of an equally robust character creation system when compared to the same game). And from this also stems the advent of player-choice in warrior or spell-caster archetypes built into the framework - each with accompanying skill-trees that let you “Create Your Own Death”. 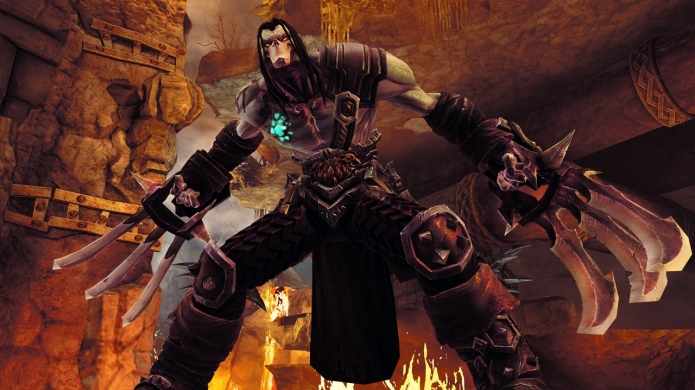 It’s an interesting component to what is otherwise an action-adventure game, and quite welcome in my opinion. You even have the option to turn on or off a number display for each attack you dish out, or receive (ala traditional RPGs), keeping the game within embrace of its predecessor, or for you to maximise in its new-found RPGisms.

As mentioned though, Darksiders isn’t specifically all about combat, with a robust exploration and adventure component being of equal merit, and here this seems to be well and truly intact. There are myriad hidden treasures for you to find, and a currency system returns for Death to shell out to vendors for even more badassery, though this too was barely touched upon. In expanding upon the adventuring side of things though, Death will gain his trusty steed, Despair, relatively early in the piece (unlike Darksiders), and the ability to ride him further and more often is paramount to the “twice the size of the original” byline we’ve been pitched for so long.

Moreover, the idea that the dungeon we’re privy to at our event isn’t even necessary for the main story leaves much to the expanded gameplay imagination. Apparently it’s one of many, and completionists are going to have a field day with just how much more there is to do in the game.

The engine itself has been overhauled, bringing Joe Madureira’s original artistic vision to life, and leaving the art team to their most insanely creative devices, as it were. The set-pieces in this side-mission alone were stunning to look at, and we haven’t even seen the various overworlds, friendly NPCs, bosses or main quest line dungeons yet. It also looks like level-design is back in compelling spades, alongside cerebral puzzles we’re told will dwarf those of the first game in terms of challenge and scale, and no two dungeons will follow familiar patterns this time around (something the first game borrowed heavily from The Legend of Zelda series) giving each and every area you visit its own flavour and flair.

Unfortunately what we saw ended as quickly as it began; like the proverbial deathblow from Death himself. There’s still a lot to be revealed though, but right now we’re absolutely hooked. From here it’s all about the finer details: What’s behind Death’s mask? How big is “big” really? Will either of the other two Horsemen show themselves? And what of the insidious Azrael from the first game? Surely he shows up in Death’s investigations into his brother’s alleged actions that lead to the apocalypse? And, and, and... ah but alas, we’ll just have to wait and see.

One thing is certain from all of the above though, Darksiders -- as a series -- is a part of that Triple-A echelon so many other developers and publishers hope their games can reach, but it does it with such ease and grace, it might as well be metaphored by the strength, agility and deliberation of Death himself, a lot of which you can watch in video form by clicking here.

Otherwise stay tuned to AusGamers over the coming days as we have even more from the event, including developer interviews and more.

Read more about Darksiders 2 on the game page - we've got the latest news, screenshots, videos, and more!
Tweet