With its modern setting and overhauled Frostbite engine, Battlefield 2042 is not only the latest entry in the series - it’s aiming to push the sandbox into new and exciting territory.
Battlefield 2042 Interview - We Sit Down with DICE
Max Payne 3 Hands-Off Preview
Post by Steve Farrelly @ 03:56pm 04/11/11 | Comments
AusGamers was invited out to Rockstar Sydney's offices to check out Max Payne 3 in hands-off mode where we got a feel for where Rockstar are taking the iconic character. Read on for our full thoughts...


It's understandable people are somewhat trepidatious when it comes to Max Payne 3. Remedy's much-loved crime noir piece arguably paved the way for bullet-time in modern games while introducing us to the titular Max Payne, a hardened New York detective whose family's demise at the hands of mobsters lead him to go on a personal quest for revenge, one slow-motion bullet at a time.

It was a game that didn't take itself too seriously, but managed to maintain a balance between fun and narrative drive. It's sequel was equally well-received because it kept the game well within its roots, that is, it essentially sent Max on a continued mobster manhunt where our only two weapons were both the aforementioned bullet-time and Max's unwavering hatred for the types of scum who killed his family.

Enter Max Payne 3, with its steady flow of media from franchise owners Rockstar who released images of Max looking a little worse for wear and not quite how we remember him. In fact, the Sao Paulo look for him has drawn comparisons to later years Bruce Willis (or even Zack Galifinakis of The Hangover Part II), and it appears people might not be ready for a sweat-soaked, ageing, overweight Max living it up in the slums of Brazil.

Fret not dear reader, as Rockstar still very much know where our hero comes from, and it's the point of entry for us in our recent hands-off demo with Rockstar in Sydney. Here we find Max with a full head of hair and wearing his signature, drab New York detective uniform. He also happens to be in New York where he's once again managed to piss off the wrong people, after inadvertently killing the son of a major crime boss who's tracked Max down to the apartment of one of the only people he can trust.

Obviously the above is an excellent way to get things moving along in classic Payne fashion, and we're thrust into a corridor shoot out with the mobsters as they try to take Max down. Once again he's armed, Woo styles, with two pistols and a dive mechanic that would make Chow Yun Fat blush, and we're happy to report that all things Max Payne are truly in check.

What's interesting about that last statement though is that if you remember, and it's something I touched on above, the first two games just didn't have much beyond the core dive and bullet-time mechanics, here, however, we're privy to a much more mature game with a lot more going on for it beyond the usual. It's all still in there, it's just that this is a Rockstar-developed Max Payne that I'd argue has a bit more in common with Red Dead Redemption than the series' past, and not at all for the bad.

Max has been imbued with NaturalMotion's Euphoria animation and skeletal tech, much like Read Dead and Grand Theft Auto IV before it, and for the better in my humble opinion. He moves with the right deliberation, but unlike the aforementioned games, Max’s use of the animation system is far more robust and realistic. The way he moves when he’s on the ground, for example, is a thing of beauty. Take a Woo dive and land chest-first, and you can keep Max prone, but also still move him from this position and full 360 degrees. He’ll prop his body weight up via planted elbows and even his feet and ankles appear to help him shift his weight, all while remaining flat on the ground and, clearly, out of the path of enemy fire.

The simple addition of Euphoria already makes the game worth the wait (and changes). Max just feels more believable now, and much of the gunplay works better off of Euphoria, though I will say it looks a bit less ‘arcady’ now, which may be of concern to some players out there.

The corridor components are here in full check, and akin to the ever-evolving Rockstar cover system, Max can back up against walls, duck under holes, blind-fire from cover, and move between cover-points. We saw this expand greatly from GTAIV to RDR and in MP3, it looks like the incremental changes are for the better. Obviously my demoer was pretty versed in what they were showing me, but I felt confident I could have picked up and the controller and played without too much of a learning curve.

There was a fair bit of narrative in-game scripting in much of what I saw, such as an explosion at the end of a corridor that left a handful of goons scattered -- in pieces -- about the place thanks to the handy-work of a crazy guy who lived in the apartment building where Max was being set upon. His inclusion was just another example of the game being of in-house Rockstar pedigree now, as a wonder through his apartment showed a lunatic on verge; crazy notes all over the walls, traces of a shut-in lifestyle, and all delivered to the player as a simple visual footnote on the world of Max Payne.

This sort of thing helped prove the team are maturing the brand, character and narrative, which also echoed in volume once we got to Brazil. You’ve seen the video and screens, but a bald and overweight Max showed a sense of growth you don’t often see in videogames. It was a breath of refreshing air, though the team have also done an amazing job of bringing the industrial slums of Sao Paulo to life; choked by thick smog and vicious gangs. The place is a dive; littered in graffiti, gutted out buildings and complexes, and full of factories and warehouses just screaming out to be used in visceral Max Payne fire-fights. 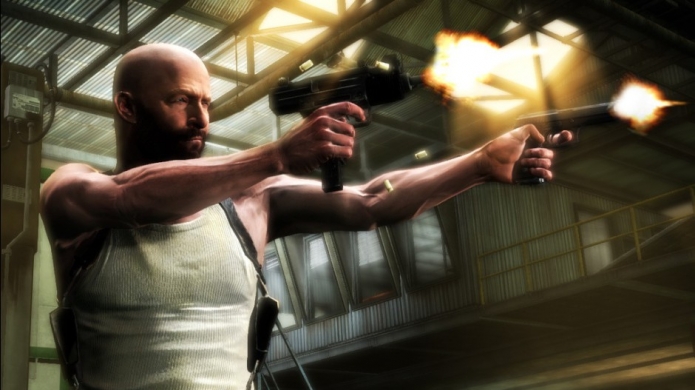 Thankfully these come in thick and fast, and you find a pretty good balance between level progression and enemy choke-points. Max can also use the environment to his advantage, such as crushing enemies under jacked up cars, or the usual exploding barrels. There’s also a neat bullet-cam death that comes with the clearing of each of the aforementioned choke-points, indicating you can move out from behind cover and scour the area.

I mentioned similarities between this and Red Dead Redemption, but one area they’re not the same is in level-design. Max Payne 3 is very much a level-by-level progression game. It’s linear in this way and almost the antithesis to the usual Rockstar open-world approach to games, but again, it’s refreshing because of this. More emphasis has been made on the immediate environments around Max, which appear to be far more interactive than any previous Rockstar games.

Story-telling is a mix of classic Max noir comic book panels, and in-game cut-scenes. A neat feature though, sees the end of the latter becoming interactive and epically Max Payne, and usually involves some kind of crazy action move like diving off a huge platform, guns a blazing, or swinging from a chain to interact with some deadly part of the environment. It’s all neatly tied into a better Max Payne narrative and story that also features not only the original voice of the series, but for the first time ever, his actual likeness, too.

The final part of our demo saw Max, with a young lady he’d been escorting through the Sao Paulo slums, on a bus attempting to get away from the enemy. Max was shooting out of the door as the baddies gave chase and his companion attempted to keep the bus steady (which she couldn’t). This was a classic action movie homage sequence at its best and spoke loudly of where the game is headed: in a mix of over-the-top 80s style action, gritty urban gangland violence and true character redemption. With bullet-time, of course. And honestly, at this stage we can’t complain. 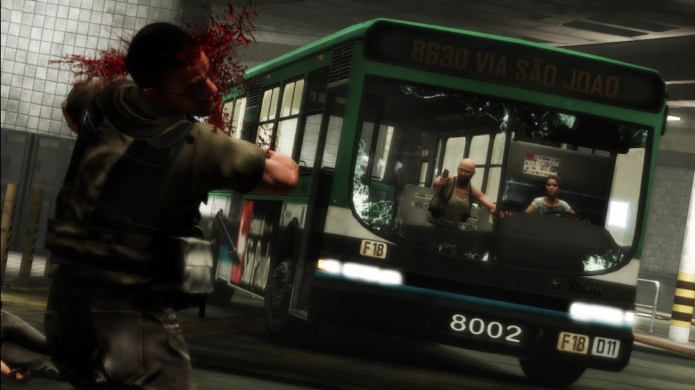 Yes this is a new kind of Max Payne, a matured Max Payne, but it retains all of the hallmarks that made the original games so enjoyable, they’ve just been expanded upon to exist in the modern gaming landscape and, honestly, it fits.

Stay tuned to AusGamers for more on Max Payne 3 in the near future where we’re told we’ll learn more about the game’s “unique” multiplayer aspect, along with a lot more about the man, the myth, the legend - Max Payne.

Read more about Max Payne 3 on the game page - we've got the latest news, screenshots, videos, and more!
Tweet