Where we fall in love with the turn-based RPG combat and new protagonist Ichiban Kasuga.
Yakuza Goes Full RPG In The Brilliant Yakuza: Like a Dragon
TGS 2011: A Quick Glance at the 3DS's Second Joystick
Post by Steve Farrelly @ 03:59pm 16/09/11 | Comments
AusGamers took a quick snap of the new second thumb-slider add-on for the Nintendo 3DS at this year's TGS. Check it out...


You may have heard that Nintendo officially unveiled a rather bulky add-on for the Nintendo 3DS at an investor conference here in Tokyo just prior to TGS (almost no Western press had access, including us).

The device adds a home-console type grip to the 3DS with two trigger buttons as well as the extra thumb-slider, making the system much more palatable for current-gen games in the third and first-person space. It's also powered by two AA batteries, a move likely decided upon to ensure its performance doesn't add to the already short battery life of the handheld (especially with 3D all the way up).

Trouncing the TGS showfloor today in between appointments, Dan and I came across two lovely ladies showing off the add-on and were even able to get our hands on it. And while we didn't actually get to play anything, the report from both of us sees it as a comfortable addition, though its size certainly negates the portability of the 3DS. But given its battery life and the likelihood most people play theirs at home as a smaller console, it's not that big a deal. It's obviously also detachable, so you can just store it away in your bag, but it's definitely not pocket-friendly.

We've uploaded an image of it you can check out below, and apologies if it's not the best photo, my iPhone was the only device handy, but we'll try and get better snaps tomorrow for our annual TGS photo journal entry, so stay tuned. 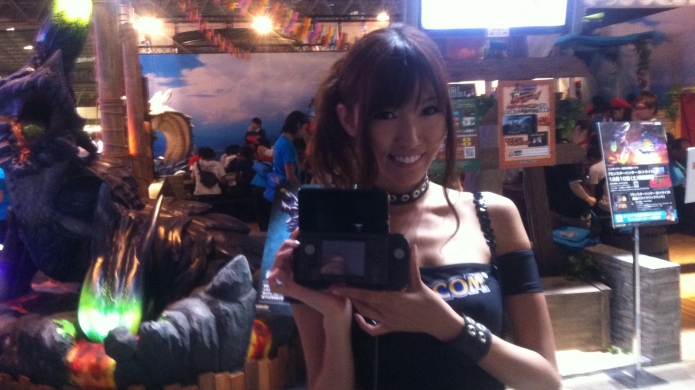