Where we fall in love with the turn-based RPG combat and new protagonist Ichiban Kasuga.
Yakuza Goes Full RPG In The Brilliant Yakuza: Like a Dragon
GamesCom 2011: Gotham City Impostors Hands-On Preview
Post by nachosjustice @ 03:32pm 01/09/11 | Comments
We recently got some hands-on time with the upcoming multiplayer first-person shooter Gotham City Impostors and had a cape-adorned blast…


It’s difficult to look at other multiplayer first-person shooters when DICE one-upped the hell out of GamesCom with a 64-player Conquest match of Battlefield 3. And while Battlefield 3 was a transcendent and epic experience, Gotham City Impostors still managed to impress with its more intimate offering.

By intimate I, of course, am referring to a much smaller maximum player limit across platforms; 12 players to be exact (even though my session consisted with a 3v3 match). But what Gotham City Impostors lacks in a maximum player limit, it more than makes up for in charismatic charm. Comparisons to Team Fortress 2’s humour are well founded, which is immediately evident in both the premise and presentation of the game. The idea is simple: a ragtag group of Gotham City inhabitants are keen to prove their worth as superhero replacements in a battle for control of the streets.

This concept sounds quirky because that’s exactly what Monolith Productions is aiming for. Before play began, we were shown a poster of three different Batman-type characters: a fat old man, an average sized dude and a smallish Batgirl-esque lass in roller-skates. The dev in charge of the presentation was quick to point out that the heavy, medium, light-looking characters were not classes but were, instead, some of the appearances players would be able to access as they played the game. Apparently, some of the incentive for sticking at Gotham City Impostors is unlocking various kit items that can be combined in countless ways for that ultimately personalised faux crime fighter look. Think about the ultimate cosplay event, including those people who dress as shitty versions of their favourite superheroes, and you get the idea. 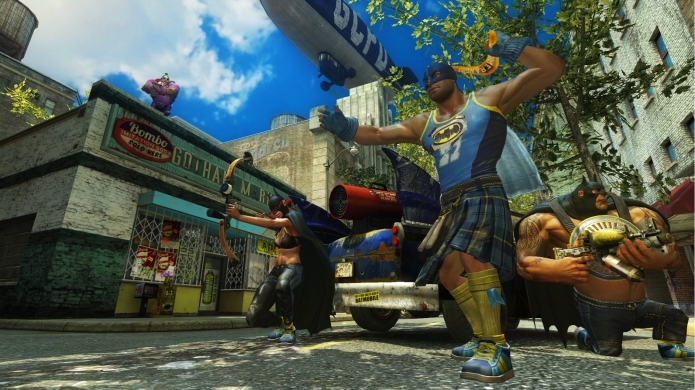 We played a single map and mode that took place in a dirty corner of the Gotham City, whereby we were required to capture and hold certain points to beat the other team once the counter hit 100. What sounds like your standard conquest/domination/king of the hill is shaken up with a single alteration. Instead of having the capture number being dependent on seconds or remaining team tickets, the counter feeds from the other team’s points. Playing as team Batman, we managed to fight back the Jokers who had us a mere four points away from defeat for a super satisfying comeback victory. Throughout the match the winning team switched several times and it forced us to split up to capture and protect multiple points in order to achieve our win.

The map we played on was fairly meh when approached on the ground level, but the addition of trampolines as well as selectable glider or grappling hook gadgets changed up the way you navigated, thus, influencing the combat tactics. Gotham City Impostors plays exactly like Call of Duty if approached in a traditional sense. The default controls are nigh identical with the only noticeable exception being that the ‘special grenade’ button is non-existent and, instead, activates your selected gadget.

Select a grappling hook and you can reel yourself into those hard-to-reach places. The clown who’s guarding a particular point from the ground is going to have to contend with a few more attacking zones when you take to the rooftops. Better yet, the grappling hook can be used offensively and defensively. If you’re taking too much heat, zip up to a nearby roof or simply use it as a way to navigate around the map faster. Shoot it at an enemy and you’ll pull yourself towards them for a point-blank takedown opportunity.

I also took the glider gadget for a spin and was impressed with its potential. Anytime you’re in the air, hit and hold the gadget button to go into a glide. The higher your starting point, the further you’ll glide, but you can also increase your altitude by making use of ground-based trampolines or soaring over handy hot air vents. If you use the air vents correctly you can get higher than the roof-dwelling grappling hook wielders, which adds another height that enemies have to be aware of. Best of all, when you’re cruising the skies you can activate a one-hit takedown drop attack that is particularly classy when used on enemies trying to grapple away from you. 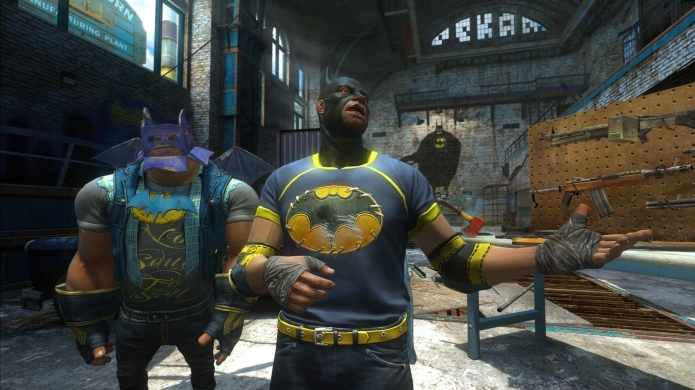 The only other gadget we had time to try was the boomerang that didn’t seem to dish out sufficient damage to justify equipping it over the infinitely more useful aforementioned options, despite the handiness of its lock-on ability. On the topic of damage, it was initially jarring to see a hardcore RPG feature within Gotham City Impostors: numerical damage counters. It didn’t seem to be based on a 100-hitpoints logic either, which added to the jarring factor, and I wouldn’t be surprised if it was jettisoned from the final product.

With a first quarter 2012 release date for this digitally distributed first-person shooter, it’ll be interesting to see if it can capture the attention of shooter fans who will undoubtedly still be caught up in the online allure of juggernaut titles such as Battlefield 3 and Modern Warfare 3.
Read more about Gotham City Impostors on the game page - we've got the latest news, screenshots, videos, and more!
Tweet