Thanks to the Bethesda ANZ, we've got an amazing custom The Elder Scrolls Online Xbox Series S console pack to giveaway in Australia!
Win This Amazing Elder Scrolls Online Xbox Series S Pack
Dishonored Preview
Post by Steve Farrelly @ 07:27am 18/08/11 | Comments
AusGamers was treated to a hands-off demo of Dishonored from Arkane Studios at this year's QuakeCon. Read on for our thoughts...


Ladies and gentleman, welcome to the first-person renaissance.

With titles like BioShock, Mirror's Edge and even the original The Darkness, the first-person action genre has moved along in leaps and bounds. Expanding upon its 80 degree viewing plane and even out from behind the traditional weapon iron-sights to larger, more visceral worlds, no longer is an FPS strictly about run-and-gun gameplay through tightly packed corridors with predictable and ever-respawning enemies. Now, in this renaissance, there are no gameplay limitations on what the genre can encompass, be it descending to the depths of the Atlantic Ocean for a little Plasmid pick-me-up and some play-time with a Big Daddy and his Little Sister, or free-running along city roof-tops delivering important packages of social change while avoiding fascist authorities always hot on your tail. It can even be about using your Darkness-powered snake arm to creep inside a building through an open window and stealthily eat the heart of an unsuspecting mobster hell-bent on taking over your turf. 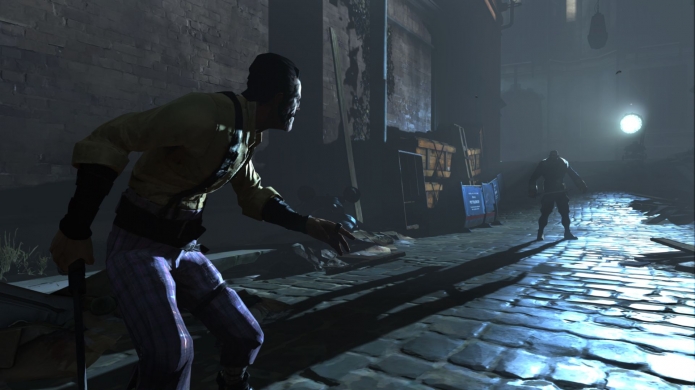 Dishonored, from Arkane Studios (Arx Fatalis, Dark Messiah of Might and Magic), is a “first-person action assassin stealth game” -- as described by Arkane Austin co-founder, and original Deus Ex gameplay designer, Harvey Smith -- and stands as the epitome of the expansion of the first-person action genre detailed above. It comes packed with cerebral gameplay built from a set of dynamic systems that empower players to truly think outside the circle and essentially play the game the way they want to play.

At this year’s QuakeCon, AusGamers sat in on a behind closed doors gameplay demo of Dishonored, running on Xbox 360 on a modified Unreal Engine that actually harboured more of a likeness to Valve’s Source engine, oddly enough, thanks to a new and unique lighting system the team at Arkane have implemented. It looks stunning, with a retro-history art style built around industrial design sensibilities that kind of look familiar, but then kind of don’t. This is because the game is set on a parallel sort of Earth, with four main islands spread across a vast sea where whaling has become the world’s main economy.

Unfortunately, it turns out the precious oil from these whales is a little more than the cities can handle, and a deathly plague has descended upon civilization, halting its prosperity in a single swipe. That is, anyone who isn’t a high-up official of some sorts. The city of Dunwall -- where our adventure takes place -- is home to a corrupt regime exploiting the plague, and whaling, for their own nefarious purposes. It also turns out our protagonist, Corvo, was once the royal bodyguard of Dunwall’s Empress but was framed for her murder and is now seeking revenge -- and answers -- through high-profile assassinations... and a little bit of magic.

According to Harvey and his Arkane cohort, Raphael Colantonio, you can play the entire game in pure stealth, and never even come into contact with anyone outside of your target, or you can play it as a first-person melee combat game; attacking guards and enemies at will, or, in combinations of both, as you see fit. They also stress that this is not an open-world game, despite the emphasis on parkour, stealth and action (which funnily enough, seems completely in line with Bethesda’s other big FPS action title due next year, Prey 2 from Human Head Studios). 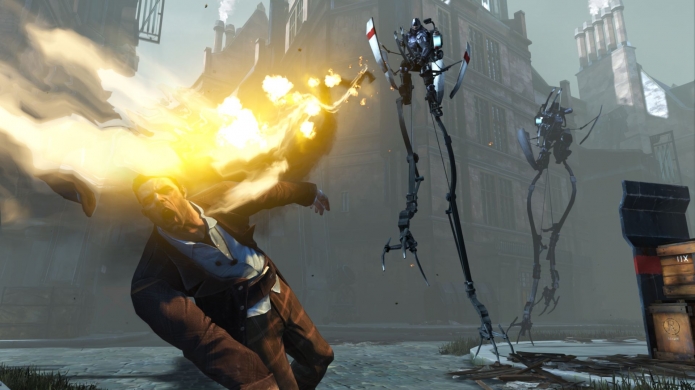 The above isn’t to say there’s no room for exploration or movement though, this is a game about assassination after all. So Dishonored is broken up into a level-by-level structure based around missions and objectives. Some of these manifest on-the-fly as secondary components to what the narrative is guiding you toward, and thus opens the game up for creative thinking and the all-important replayability factor. But it’s definitely a guided experience. In setting the scene this way, Arkane have been able to focus on player-choice in other areas that more specifically involve abilities and magic, as well as the aforementioned choice between knives-a-slashin’ or keeping to the shadows.

Corvo is armed in his right hand with a short melee-specific blade, while he can arm his left hand with anything else he finds in the world, such as pistols, or magic, as it were. This constant reminder of close-quarters play through a persistent grip on his short blade, keeps the game feeling less and less like a run and gun shooter -- and for the better. It’s also not about ranged, stealth combat, specifically. Rather, the magic and abilities component play into each other as a set of basic maths tools where X plus Y equals player-driven cause and effect.

And this is where Dishonored truly shines. Where most designers would see an exploit of multiple system combinations as game-breaking, Harvey and Raphael embrace it. During the game’s development they had a handful of basic ideas for gameplay systems, such as the ability to posses any other living creature in the game-world, for players to choose how to progress. In the possession instance, it was for Corvo to be able to zip into the body of a rat and then use ventilation systems to gain access to a stronghold he might otherwise have had to melee his way through. Once inside, he can take on his human form again and proceed as necessary.

There’s another cool system they created though, which allows for the stopping of time, with complete freedom-of-movement on your part available while everyone else around is frozen in their last action. And cool as this is as a stand-alone ability, Smith and Colantonio revealed to us that it was a QA tester who combined the above two abilities -- in a way they never conceived -- that opened their eyes to the potential for creative freedom. 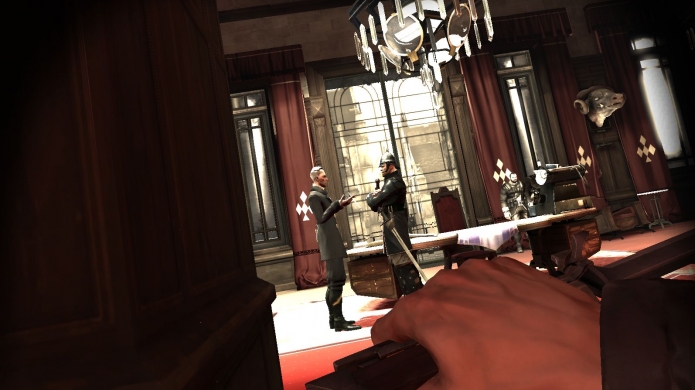 It turns out, through a basic understanding of said systems, equally said QA tester decided that when he stepped into a guarded room and was shot at, he froze time. The bullet from the assailant’s weapon was but centimetres from the weapon’s muzzle. He then possessed the gunman, and moved him into position in front of the bullet. A bullet he’d just fired from his won weapon. The tester then turned time back to normal, and low and behold, the bad-guy died by his own hand. Brilliant.

What we learnt then, is that the game is being built around more and more of these exploits. If someone playing it finds a combination of abilities that “breaks” the game, the guys go back and rework level design to better accommodate it, instead of just stopping the full combination in the first place. It’s refreshing in a world of confined games; where levels feel more like scientist mazes for hyper-smart lab rats than the free player-choice environments they should be.

The bigger problem here though, was the difficulty in correspondence of such a set-up. During the demo, which was excellent and utterly visceral, it was difficult to even understand what was going on. The game looks fantastic, and the combination abilities and open-concept puzzle approach were thoroughly engaging, but the UI was odd and messy. We never really knew what was going on one minute from the next; like we should have been in on the secret from the start. But this equally reminded me of seeing the E3 demo of BioShock Infinite - another game whose systemic systems thoroughly confused -- and awed -- its viewers, for the sheer fact of being successfully different and openly engaging within a defined genre.

If anything, it’s the idea of being different now that is the driving force behind the sudden emergence of games of this calibre. And in a gaming world built around derivative war stories and predictability, seeing the likes of Dishonored is a massively refreshing breath or life. We’re definitely keen to see more before we call this anything but a wonderful demonstration of interesting ideas with a great narrative spin, but so far -- honestly -- so good.

Read more about Dishonored on the game page - we've got the latest news, screenshots, videos, and more!
Tweet

Latest Comments
Commenting has been locked for this item.