With the Dead Space remake out this month, we sit down with the voice of Isaac, Gunner Wright, and Motive’s Joel MacMillan to talk in-depth about this passion project.
Dead Space Remake: The Big Interview
Metro: Last Light Preview
Post by Steve Farrelly @ 04:34pm 13/07/11 | Comments
AusGamers checked out a behind-closed-doors showing of Metro: Last Light and walked away needing the comfort of a night-light. Read on to learn why...


If you could see my scribbled notes from the behind-closed-doors viewing of Metro: Last Light I was invited to at E3, you wouldn’t be able to read them. I can’t, and it’s my freaking writing. There are two reasons for this and the first, coincidentally, has a lot to do with one of the game’s key features. The second, as it were, was simply that I was so blown away by everything happening on-screen, I could not properly write anything.

So what was the coincidental first? Light. In the viewing theatre it was already pretty dark, but the game itself is near-on pitch black, so I couldn’t rightly see my notepad or pen for looking. But this really is a correct metaphor for what I saw and experienced. Metro Last Light is twice as dark, twice as chaotic and twice as gorgeous as the original Metro 2033, giving it twice the oomph. Anyone who had issues with the first game, will see almost all of them addressed here, without losing any of what made it such an impactful right-out-of-left-field release. 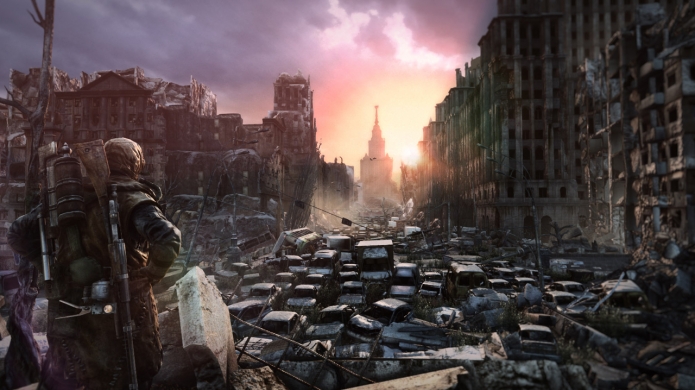 To set the tone though, Last Light takes place after the events of 2033. For followers of the series’ writer, Dmitry Glukhovsky, this is not based on the sequel he wrote called Metro 2034, but was rather written within the universe Glukhovsky created, only specifically to fall more in line with how a videogame should flow (2034 is apparently not in the right space for interactivity) by the game’s lead designer. So what we get as a result is clearly a game that takes its world from an established construct, but is crafted to take advantage, specifically, of the medium.

This means we’re still going to experience a lot of scares and feel insanely tense throughout the experience, because at its heart, Metro is a survival-horror game, but action has also been amped up this time around, and the team are even looking to lose the whole “ammo for currency” angle which clearly annoyed a lot of people. And in the demo we were shown, there was definitely less of a concern about how much lead was being spent in the line of post-apocalyptic duty.

It’s honestly difficult to actively relay what I saw in detail, because it was one dark blur. But i also need to reiterate that my constant reiteration of the game’s fondness for darkness is not at all a bad thing. We did see moments of stealth, so much so the characters were even unscrewing light-bulbs instead of shooting of smashing them to lay cover of darkness and not alert guards. What was fantastic about much of the dreary, dark lead up though, was that its culmination saw the two main characters walking into the hall full (and I mean full)of a separatist station community with clearly fascist leanings (read: they were all Nazis). 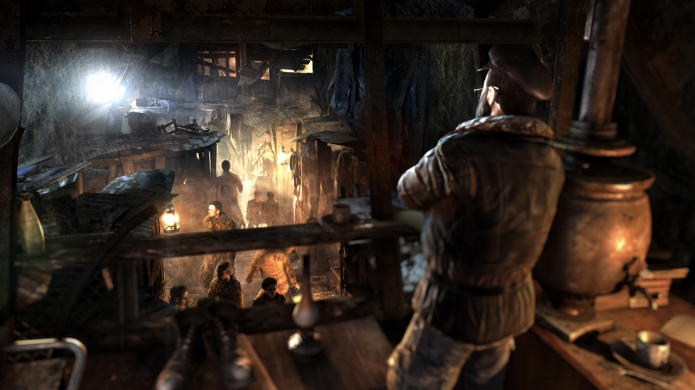 I want to use the word “intense” with some italics and bold for good measure, because the whole sequence was absolutely that: intense. Eventually they’re made and need to get into a rail-car to escape. This, though, winds up escalating things further, as not only are we seeing intense shooter action in an on-rails sequence worthy of John McTiernan’s nod of approval, we’re also eventually taken along for a new ride as series protagonist, Artyom, jumps from the rail-car to an actual train carriage as it darts through the underground Metro subway.

Before I get to the action at-hand, it’s important to point out about here that this demo we’re seeing is running on PC and looks incredible. The last game, on PC, was something of a “DX11 can do this, get it!” slogan in action, and while there’s no specific tie to any new PC benchmarking related to its release, being friends with NVIDIA obviously has its advantages, and Last Light looks amazing. Destructible cover and lighting are the new heroes here, but there’s a great emphasis on animation, cloth physics, particles and more. The entire train sequence was taking place at high-speed and through the peripheral focus on the likes of lighting or cloth physics, for example, the sensation of being trapped on that car, at that speed, while fighting baddies, was absolute.

The final result at the end of our demo was that like the denizens of the world of Moscow’s subway system, the team at 4A Games have grown and learnt to capitalise on their surroundings. They’re a clearly matured developer who understand the value of the IP at their fingertips, and want to relay the experience it offers as best they can. 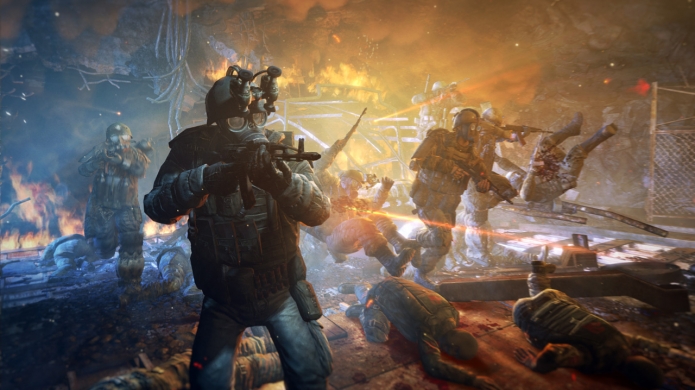 It’s also telling when you can clearly see that a developer has actively broached issues with a product raised by critics and fans alike. This is more than obviously the case with Last Look, and the team made certain let us all know with the demo they showed. It featured the right amount of stealth, action and survival-horror invitingness needed to sell the matured direction as a sequel, and also more than looked the part. We also found out the game was running on a reasonably modest PC (not usually the norm at E3) and it still looked incredible, so our hats really are off to the team.

Obviously we still need to see a lot more, and the announcement there’ll be some form of multiplayer definitely needs to be explored further before we can make any final judgements, but the truth is, in everything I saw at E3 (and there was a lot), this easily made my Top 10 Games to Watch list (this is a secret list in my head only I have access too). Metro: Last Light really is looking to be less of a last light in the FPS genre, and something of a guiding light if they can maintain the course we were privy to at E3. Definitely one to watch.

Read more about Metro: Last Light on the game page - we've got the latest news, screenshots, videos, and more!
Tweet