A celebration of the long-running franchise and a great way to kick off Switch gaming in 2023.
Fire Emblem Engage Review - Strategy Gold
Duke Nukem Forever Hands-On Preview
Post by Steve Farrelly @ 01:04pm 04/04/11 | Comments
AusGamers had an extensive hands-on play session with Duke Nukem Forever. Read on for our full impressions...


I’m going to say this upfront and honestly: From what I played, Duke Nukem Forever is excellent. By no means is it the second coming of videogames, nor is it going to change the way we look at our medium, but as far as old-school first-person shooters go, and, more importantly, how Duke goes, DNF does a bang-up job at bringing this rusty old character to a new generation of gamers, as well as new gaming platforms beyond his traditional home on the PC.

It’s reverent, in a self-referential kind of way; constantly poking fun at itself along with the games industry in general, and it does so with a grain of salt. The reason it can get away with this is simple - you’re the best dude on the planet and aliens have come back to Earth to seek revenge against you for kicking their ass last time they were here, by stealing your woman. That’s it. That’s the pretext to everything that plays out in Duke Nukem Forever. And so if you were looking for a serious game that takes you on an epic journey of discovery, Duke Nukem Forever ain’t it. 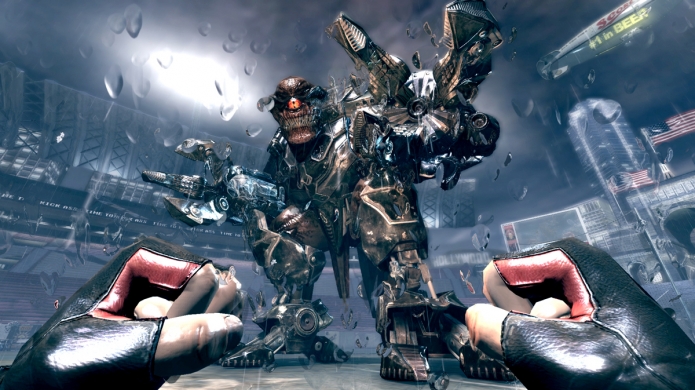 There’s no denying the game looks its age - nothing here breaks ground in the visual department, but it doesn’t need to; older Duke games were equally uninspiring in the visual department; instead, the series relied heavily on its comedy factor and solid shooting mechanics, which Duke Nukem Forever has in spades. The main man is voiced by the same guy who’s been chewing bubblegum for the entire series’ lifespan (Jon St. John), and the comedy is as tight as ever. Ironically, while the game’s shooter stuff is pulled right from the classic PC FPS playbook, there’s more variety in gameplay in the first hour here than there is in an entire single-player campaign of Call of Duty or Medal of Honor.

I was given the full opening of the game, which is about two and a half hours long, and really kicks off with a bang. From the outset you’re standing at a trough, dick in-hand, peeing. It’s almost too on the money for what’s going to follow, and the metaphor couldn’t be screamed any louder - Duke Nukem Forever takes the piss, and that’s the point.

After this (you can continually pee, and even pick up a loaf out of a toilet and throw it against the wall) you’re essentially charged with tackling a giant alien boss on a football field. It’s pretty easy, but but sets the tone for the game to follow, which it turns out is what you were doing here in the first place - playing a Duke Nukem game as Duke Nukem. It’s the beginning of the game’s self-referential nature, and we’re told there are going to be some 300+ Easter Eggs hidden throughout.

Walking around Duke’s mansion located in Las Vegas, you can find copious amounts of throwback material to the Duke titles of yesteryear, and fans will really get a kick out of just how in-depth and rich the visual history is. It actually takes a while for the game to begin proper, with a lot of NPC and environmental interaction setting the comedy tone; essentially reminding you to make sure you get the most out of the hidden hilarity goodies the game will serve up post-intro. 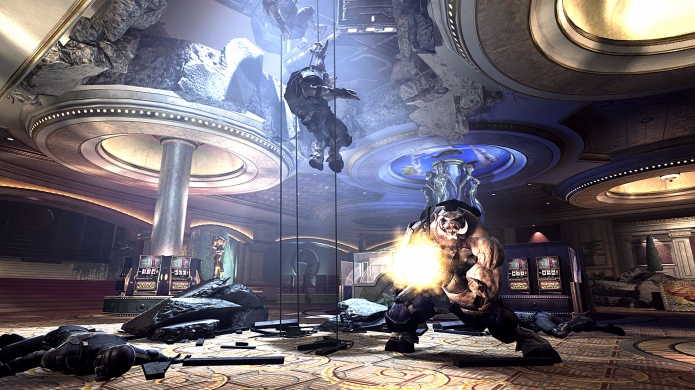 It’s when the game kicks into high shooter gear that it shines the most though. For all of Duke Nukem Forever’s funny moments (and there are a lot of laugh-out-loud jokes), it’s when you get your hands on the shotgun that Duke feels the goods. It’s a triumphant return to FPS form in this journalist’s mind, and the shotgun is front and centre here; dispatching charging Pig soldiers left and right like the good old days. It’s another point of the game’s throwback nature, but it does this without feeling dated, despite looking like a game that has been in development for more than 10 years. This isn’t to say that you’re only playing with the Shotgun, as there are a plethora of cool weapons on-hand, it’s just that I haven’t felt this powerful with such an old-school weapon in a while, and it’s a very, very welcome return.

Of my two plus hours with the game, around 90-minutes of it included platforming, driving, puzzle-solving and a lot of environmental interaction. Level design throughout was excellent with a fair amount of back-tracking ala Metroid, but each time, despite design familiarity, it felt fresh and different with new weapons or gameplay tools. Emerging from Duke’s casino saw me engaging enemies with a troop of soldiers by my side - I was even offered some pansy armour which Duke actively refuses (said armour is actually master Chiefs), before trouncing through a destroyed Vegas strip. Aliens come at you from everywhere, and the pacing here just felt spot-on with a heady variance of enemy-types to tackle.

I came across at least four sub-boss battles before the demo ended, and there was just this awesome sense of consistent and persistent action the deeper I got into the game, of which we were told the single-player campaign is likely to be 10-plus hours long for good players. No new information regarding multiplayer cane out of my gameplay session, but I can see why they’ve kept it relatively small with four vs four on the cards - it’s another component to the throwback direction here, and I honestly couldn’t see this type of design lending itself to large-scale MP, but we’ll have to wait and see for more specifics in that department. 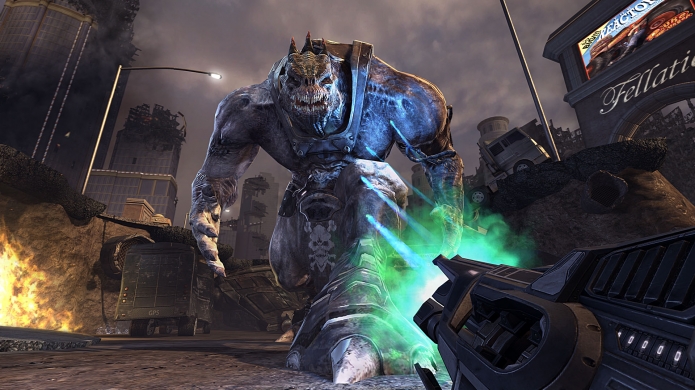 So after 12-odd years in development, the real miracle here is that the game is coming at all, beyond that you could just say everything else is a bonus, but that would be short-changing what is actually a solid gaming experience. It’s not the greatest-looking game on the market, nor does it change up any formulas; it’s deliberately nostalgic in its gameplay and works as a result. The comedy throughout is spot-on and the game reminds us that it’s just that: a videogame. And in a world where videogames take themselves more and more seriously with each release, this is a welcome approach indeed.