AusGamers: Welcome to AusGamers once again, last day of the show at E3 2010. We're sitting here with Steven Ter Heide from Guerilla Games. We just ran through a quick demo of Killzone 3 which is probably the best looking game on the show floor I have to say.

Steven Ter Heide: Thank you very much, I'm happy to hear that!

AG: We talked about it a little during the gameplay demonstration, but you guys have really approached a lot of what the fans have been asking for -- a lot of what the critical feedback was. Can you run us through a few of the big changes this time around?

In the level we have on show today, we'll have you firing from an intruder, where you're actually on the intruder firing down; we've got your regular combat with a new brutal melee system in there; you get to fight jetpack troopers; you get to actually put on a jetpack yourself and hop around the level. And of course these levels are much bigger this time around so it allows you to basically open up whole new routes because the jetpack takes advantage of those kind of things.

Then at the end of the level, we've got this big, massive rocket launcher that does lots and lots of damage; we call it the Wasp rocket launcher, it's kind of a portable Weapon of Mass Destruction -- lots of fun to play with -- and that's just the variety in the span of one level and something we want to do across the span of the game. 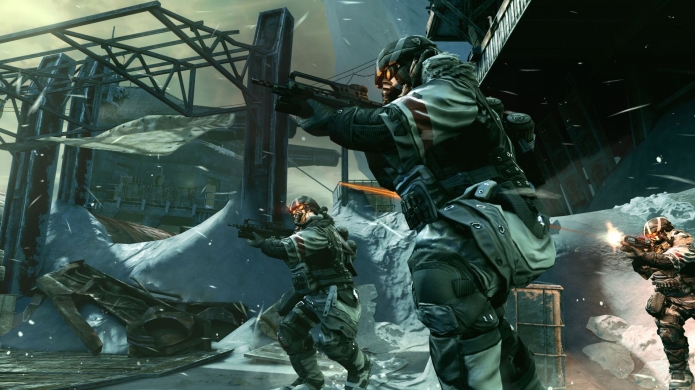 That's probably the biggest thing that we wanted to address. Obviously there's other concerns as well from the fans and critics that we've had. We want to address the storytelling; there's a couple of really good games that came out after us that just did a phenomenal job of telling a story. Naughty Dog with Uncharted -- I think they're on top of the game and they just did a fantastic job with that, so we looked at that game and said "what makes this story so good?", and I think it's the light-hearted tone they take in some of these things. Killzone used to take itself very, very seriously; Killzone 2 was a very serious game and it could do with a couple of light-hearted touches. It's not going to be a comedy -- not at all -- but a couple of light-hearted elements in there will kind of liven it up a little bit.

So it's those kind of things that we take on board and try to fix. The same goes for Rico, a lot of people had very strong emotions about Rico. Strong emotions about a character we created is great and we love to hear about that, but it shouldn't be out of frustration; it shouldn't be about "He's useless". So that's something we want to address, we want to make him more helpful. So this time around he's able to revive you if you're shot down, so it's not just you doing the reviving all of the time, he'll actually help you out. He's going to be a much more helpful buddy this time around. He's going to the same brutal melee combinations and going to look pretty awesome so that's something that we wanted to do.

Another thing that a lot of the hardcore fans commented on was controller lag is something that we are addressing as well. Obviously Killzone has it's own kind of scheme of how you move around, that all of the animations have a bit of "weight" to them. That's something that we want to keep but we want to make sure that when you press a button something happens on screen immediately. There shouldn't be any lag between you pressing a button and stuff happening on screen. So that's pretty much gone in the build that we have here already, but we're working it out to get rid of it completely.

AG: We'll have to wrap up pretty quickly, but another big change is that you guys are offering the game is 3D and from all accounts it looks like one of the best FPS's shown in 3D. Did you guys have to sacrifice anything to do that or did it actually help development of the game come along in terms of gameplay options and opportunities.

We had to do a couple of things in terms of design for it. There's very subtle changes that initially you don't think about. Things like the crosshair, where it's not actually part of the gameworld, so you have to figure out "where does that crosshair live?"; "where do you need to place it, in terms of the level of depth?", so that it's not just right in front of you where you can't focus on it. So that's something that we had to figure out and it's those kind of minor design changes that we have to make in terms of 3D. In terms of content though it's one to one with the 2D game.

AG: Awesome. Well thanks very much for that Steven, we're going to have to run, but the game looks fantastic!

Steven: Thank you very much.