Out of retirement and back patrolling the space streets, we take an updated look at Oberon Prime and Nekros Prime
Inside the Warframe Vault - Our Guide to Oberon and Nekros Prime
Star Trek Online Hands-On
Post by Steve Farrelly @ 12:50pm 18/01/10 | Comments
AusGamers has enjoyed full media access to Star Trek Online to deliver you a full hands-on report. Read on for our thoughts...


It's interesting for me, in following the development and response to Star Trek Online, as both a Trekkie and a games journalist, just how few people seem to be worried about the fact this is a videogame based on a license. True enough, the license is one heck of an expanding branch of off-shoots with everything from comics to toys to movies to novels and beyond. But the general consensus among any avid gamer is that most licenses simply don't do well when translated to videogames. What's equally interesting about this point is, barring a few examples (such as Star Trek Voyager: Elite Force), most Star Trek games have a tendency to fall very short of fan and gamer expectations. So why should Star Trek Online be any different? Is it because the game is an MMO and therefore capable of gross adjustment should the fans scream out in force against what they're given? There have been other license-based MMOs that have failed, such as (arguably) Star Wars Galaxies, so it's odd to see just how much support and interest there is behind Star Trek Online, especially given it's being handled by Cryptic whose superhero MMO romp, Champions Online, really fell short of their initial delivery.

With that said, Cryptic have approached that misstep and by all accounts, Champions Online is doing fine now. Perhaps it's the developer's ability then, to listen to their customers and fanbase that has everybody so hopeful of STO. 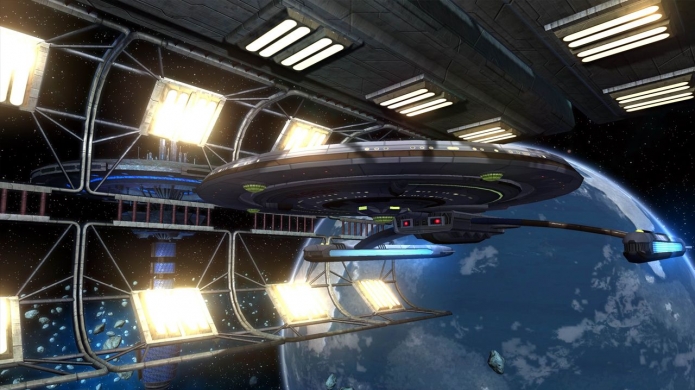 I was lucky enough to be invited to join a media beta test which meant I had 24 hour access to the build, seven days a week. (Other beta testers had to wait for greenlights from Cryptic before jumping in.) What this ready access afforded me was a look at the game in both its development entirety and development shortcomings. But don't mistake that as immediate sour grapes, Star Trek Online is a more than capable Star Trek game, and equally compelling and rich MMO experience; what Cryptic have done is combine the two entities to craft their own unique online gaming experience that will both reward veteran MMO players and enrich Star Trek fans alike.

The basic set-up sees you creating a character, like so many other MMOs. If you're a Champions player, you're going to have to deal with a less tangible character-creation tool-set, clearly in-place because this game is based on a license, but given that, you still have plenty of creation options. There are, of course, the indomitable humans alongside Vulcans, Bajorans, Andorians and, naturally, the Klingons (among others). You can also create your own race with a slightly more advanced tool-set, though your limitations here are in-keeping with the Star Trek aesthetic, a hats-off element to Cryptic right from the outset.

Prior to choosing your race, you have three jobs to choose from: Tactical, Engineering and Science Officer. From a Trekkie point-of-view, these are obvious choices and clearly stand as solidification Cryptic are keeping the license at the fore of their product here, with its gaming genre coming in more as a tool for Star Trek re-assimilation (let's face it, by and large you've been assimilated by Star Trek at some point in your life; it's become such a staple in popular culture - resistance is futile). All of this is furthered with immediate recognition in the aural department - that oh-so-familiar transporter sound, being among the first of countless bleeps and bops you'll recognise and either shudder at said recognition for, or rejoice. Either way, Trek fans will immediately feel at home, which is a good thing, because within your first few minutes of play, the proverbial Tribble excrement really hits the sonic fan. 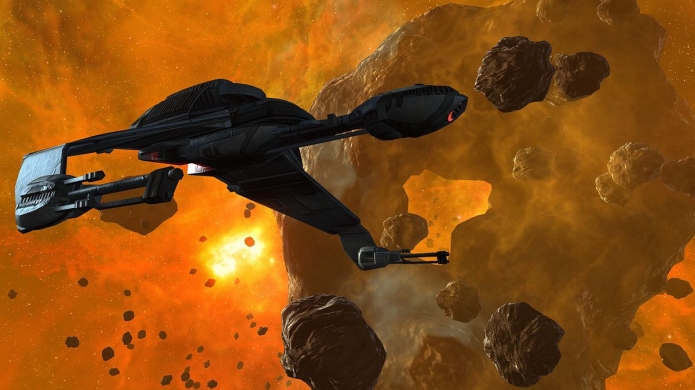 The game's initial set-up has you, an Ensign, not thrown onto the bridge as an easy death to maintain the strength and solidarity of the weekly crew we're all so used to, but rather the lone Federation officer able to clean up the mess a Borg encounter has created. As with most MMOs, your following tasks are all based around gameplay tutorials (with the trustworthy voice-over of Zachary Quinto guiding you through the game's inner workings) and are all fairly easy to perform. What's most interesting is after your initial run-through taking out Borg, fixing terminals and helping other officers, you're then told you're the highest ranking officer left aboard your ship. It's a clever and compelling way to put you in the captain's chair, and an equally good way of introducing the game's next stand-out feature - space combat.

It wouldn't be a Star Trek game with space sequences, and in these you have direct control of your vessel from the third-person. This means no bridge-view with "on-screen" representations of the action, and that's a good thing. In fact, your vessel is actually quite small amidst the size of the immediate view area around you, and it's best exampled in the early goings of the game just how easy it is to become utterly overwhelmed and outnumbered during space combat, with an armada of Borg Probes capable of combat. By and large the space stuff is fairly easy to negotiate, everything moves at a slower pace, but you can still control your ship with W, A, S, D controls, or with both mouse buttons held down. You have a range of weapons to fire which all work at specific arcs, and your ship's shields are represented through an icon with percentages for each (aft, forward etc). Whomever you have on the bridge can also help in space combat, offering buffs like emergency power to your shields. Each of these has obvious cool-down times, making strategy here an absolute must. Going all out in the early throwings of an encounter could leave you adrift in space.

Impulse power is handled with E and Q on the keyboard allowing you to adjust your speed as you see fit, but you won't be able to move your ship unless you have any form of momentum happening. It's a little different in terms of the sort of gameplay I've ever played, but five or 10 minutes with it, I was an old-hand, and it's actually very rewarding to correctly utilise your weapons, face multiple targets, manage your shields and crew members, with victory under your belt as the final point of contact. 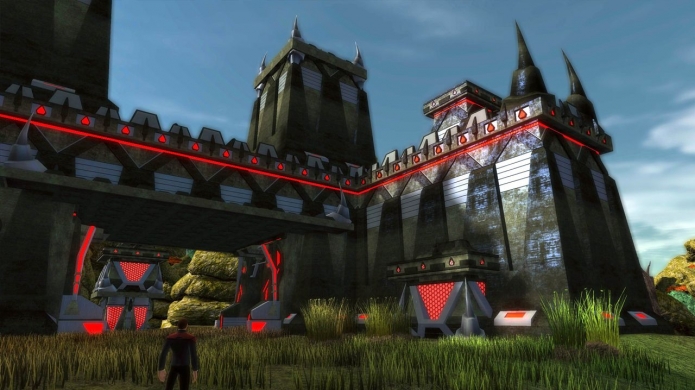 Movement between worlds and missions is handled with simple warp commands (in that your crew will ask if you want to go to warp), and the game seems to have an even split between space combat and away-team ground combat. As you progress you'll collect bridge officers along the way, each with their own unique set of tools to utilise in either instance, allowing for much AI micro-management for ultimate character optimisation. But you're never going to feel like you made a bad decision in the inclusion or exclusion of a certain crew-member. Each and every person in your team is capable of base combat, skills and abilities, it just becomes a case of selecting who you feel is necessary.

Levelling up in the game takes the form of moving through the ranks. You initially begin as an Ensign, and after you've finished with the game's opening skirmish between you and the Borg you'll wind up a Lieutenant. You'll gain new skills and abilities as you raise in rank with Admiral being the goal to reach. When selecting crew officers, you're only able to select team-members of a lower rank than you. This keeps your crew levelling, essentially, alongside you, and means your team is always up and around your skill rank, if just a little behind.

Unlike MMOs such as World of WarCraft, you're not always going to be running into other human players. In fact, you'll really only see them moving about in two main areas: an overworld star system hub (allowing you access to various parts of the galaxy), or an Earthside spaceport where you can engage in finding new missions, trading, buying, and plain customising of your character(s). This idea makes it even more important to maintain your AI team as you build yourself up, and while there are still definitely instances where you will team with other players, I've yet to find a mission where its either needed to warranted. To this end, and in digesting most of the above, you would be right to assume STO is something of an MMO Lite. This allows for Trekkies who might not necessarily be veteran to the genre to come in and feel nice and comfortable, and while there's a lot of cool, complex stuff to play with (some ship skirmishes are really hardcore), the majority of the overall game is quite easy to manage and understand. It's very much like the Champions experience, which sort of allows itself to be played at less-frequent intervals than a WoW or EVE-style core MMO. 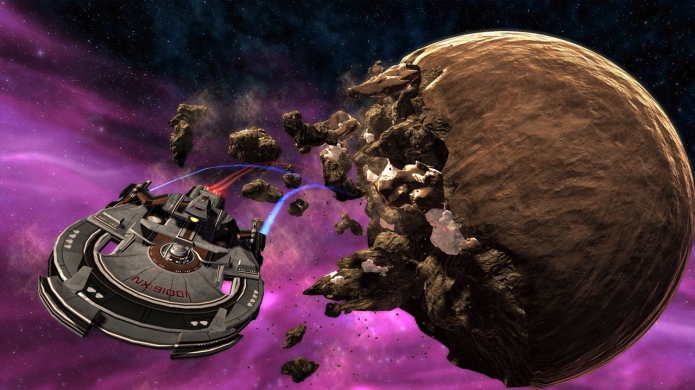 While this could be a good thing for some, it does take away a few key points of the usual RPG fare an MMO of this nature should celebrate. For one, while space combat can be both complex and compelling, ground combat is much less engaging. There are fewer tactical options available to you, and often your AI buddies handle the business for you anyway. There's less emphasis on items and as a result, most of what you're doing in the ground-based stuff is simply run-and-gun. There are missions with some cool overall arcs that actually combine both space and ground, and these have a tendency to play out like an episode of a Star Trek series, which is cool, but there needs to be a bigger emphasis on RPG elements on-ground.

While the game has actually been put together on what we're being led to believe is a small budget, everything I've encountered so far is quite palatable. The game's audio is great and it's visually great with a lot of the ships and ship designs really standing out. There are glitches in some of the animations throughout when you're running around on-foot, but this is a beta, leaving plenty of room for improvement down the track.

As a Star Trek fan, I'm so far quite impressed, and haven't even dabbled fully in everything on offer, and while at the moment the game seems perhaps a little simplistic in the wake of so many other MMOs, it does more than enough differently to stand out and I'm more than compelled to continue playing to see where it goes from here.
Tweet