Speaking to the team at Blizzard about all things Diablo IV, we got confirmation that the team is planning some pretty epic stuff for its post-launch Seasons.
Diablo 4’s Seasons will Change Sanctuary in Dramatic Ways
Brink Preview
Post by Dan @ 10:59am 19/06/09 | Comments
AusGamers takes an early look at Brink - the next big game from Splash Damage and Bethesda Softworks.


The interests of many a First-Person Shooter fan were piqued last month when Splash Damage broke the silence on their latest project "Brink", with publishing duties now in the capable hands of Bethesda Softworks. Information on the game, however, was scarce, with a brief teaser trailer to analyse and only the most basic written details available. This intrigue, coupled with fond memories of Wolfenstein: Enemy Territory and Enemy Territory: Quake Wars had put Brink among the top of our must-see titles at this year's E3. Lofty expectations to be sure, but I'm happy to say we weren't disappointed. 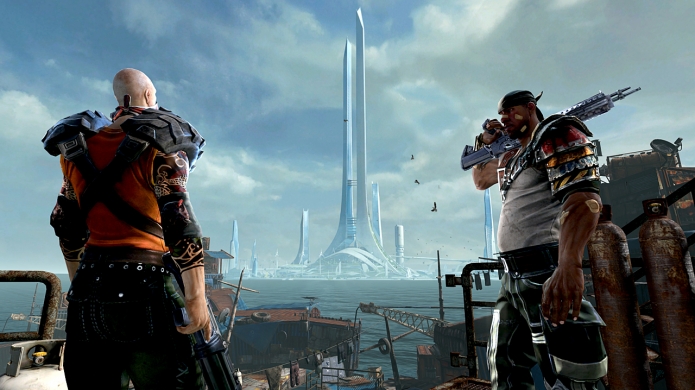 Sitting in on a gameplay demonstration hosted by Splash Damage's Paul "Locki" Wedgewood, the game we were shown is most easily described as the next evolution of the Enemy Territory game - a spiritual successor if you will. For those who have never played ET, think of a class-based first-person shooter where two opposing forces battle to attack or defend a sequence of mission objectives with a heavy focus on coordinated team work. This formula has been a great recipe for an addictive multiplayer experience, but never really translated to solo play. In fact, it has been said that the reason for the original Wolf: ET being released as a free download rather than the previously planned retail package was due to it's lack of a single-player option. ET: Quake Wars introduced some decent AI bot opponents to the mix, but the experience was mostly lost without real opponents.

As you may have guessed from that brief history lesson, the biggest apparent change to the tried and true ET formula for Brink is that the game is being crafted with both single-player and multiplayer equally in mind, using a cooperative campaign to bridge the gap. To start, we're introduced to the premise with a taste of storyline. In 2035, there's not much left of the planet and a last bastion of humanity resides on an enormous floating city aptly called "The Arc". Once a monument to civilisation The Arc has since degenerated into a civil war zone with a resistance faction arming up against the city's government run security force; the setting is, as you'd expect, part futuristic Utopia, part futuristic human filth. The level we were demoed was Container City, originally a storage facility on-board The Arc, the district is now a shanty town, housing refugees of Earth in slum-like conditions. 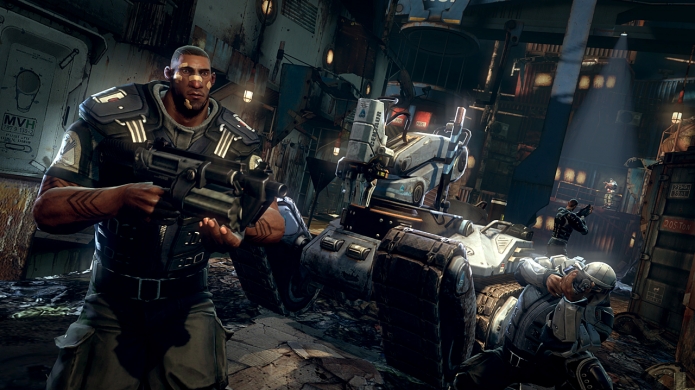 We're told the game is running on a heavily modified id Tech 4 engine, but what we're seeing graphically bears little resemblance to other games of that lineage (Doom 3, Enemy Territory: Quake Wars). With a "completely new renderer", it seems they've taken a stylised realism approach. As you can see from the screenshots here, something reminiscent yet distinctly different from Mirror's Edge or the recently re-vamped Borderlands. Whatever you want to call it, we can confirm that it does indeed look even slicker in motion.

Gameplay has a lot of elements that ET players will be immediately familiar with; soldier, engineer, medic and operative classes to choose from - what's new here is an RPG-like character customisation element that lets you create a unique looking player instead of just looking like everyone else. Different body types (heavy, athletic, light etc) will purportedly have a variable affect on your in-game movement but the rest is just for looks - your character's individuality.

Individuality is important here, because unlike Quake Wars, leveling in Brink is persistent rather than reset every campaign. You'll create a character, then level his abilities depending on how much you play as each of the various classes. As you progress, you'll unlock new weapons and abilities and improve existing ones and they'll still be there next time you load up. How exactly balancing players of different experience levels in adversarial multiplayer will work wasn't explained but it's probably safe to assume that will be a contributing factor to player match-making. 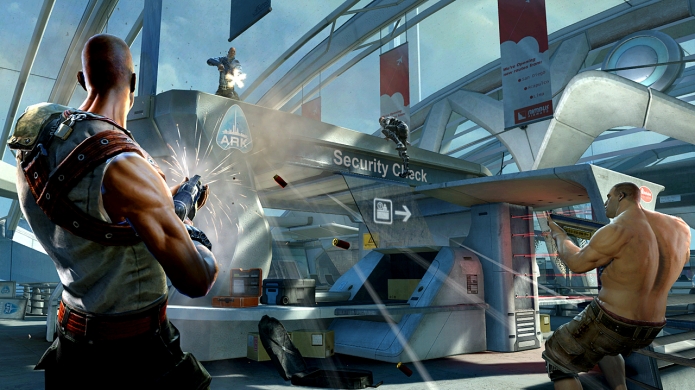 Combat is fast-paced and furious, and movement is made even more dynamic by the implementation of what Locki referred to as the SMART system. Short for Smooth Movement Across Rugged Terrain, SMART is like a context-sensitive 3D sprint button. When you hold the SMART button down and move in a direction, your character not only runs faster but will automatically traverse terrain and obstacles as you approach them. For example, when your character (holding smart) approached the laser grid seen in the above screenshot, if your view was pitched down, you would automatically go into a diving slide under the lasers. However, if your view was pitched upward you would jump and vault over the top, parkour style.

This dynamic acrobatics removes the whole bumping into small objects factor from the shooter and adds a new dimension to the frenetic pacing of gameplay. In battle players are seen flipping over and sliding under objects all over the place, meaning objective defenders are going to have their work cut out for them.

It will be worth their while though, as the game will be heftily rewarding experience points to those who perform objectives relating to their chosen class. Brink looks to be taking the ET objective system to an all new level, diversifying the little side-missions we saw in Quake Wars and making them an integral part of the game. In our demonstration (playing on the security side) the map objective was to locate a dirty bomb that the resistance were hiding in the refuge camp. Initially as a soldier, the objective was to blow a gate using the class-specific HE-Charge. This was proving difficult however, so he switched to an operative class (respawning at the nearest command point) which then presented us with a whole new set of sub-missions. 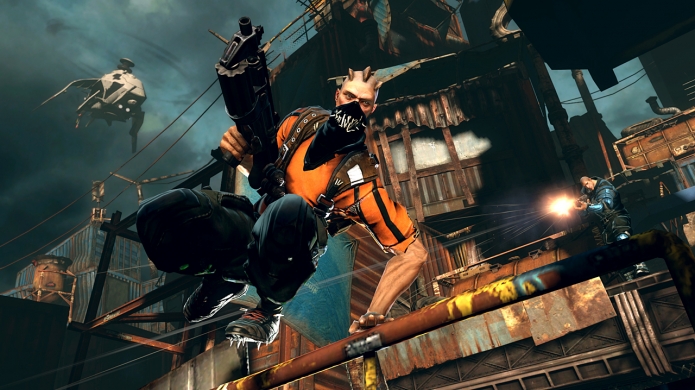 Now with scout-like nimbleness, he hopped a wall to find a back way into the facility. Following a HUD navigation arrow led us to a character we'd been tasked to interrogate. A quick switch turned the PDA the operative carries into a taser and it was objective complete; on to the next one. All the while Locki had been playing alongside six other human teammates against AI opponents, all with their own set of tasks, working toward the common goal. At any point, any one of them is able to drop in or out of the cooperative game with a maximum of eight and a minimum of just you on your lonesome.

This cooperative focus is what has enabled them to provide a much stronger storyline element this time around. There's a core narrative with many paths to take toward your goals and as you make your way through The Arc, you'll find scattered collectibles like those found in BioShock; objects that contain information about The Arc and the greater world of Brink and how things ended up like they are. The mission we were shown even ended with a cliffhanger, the dirty bomb we had been searching for turned out to be something else, something unexpected.

As avid PC FPS fans, there were a few burning questions that went unfulfilled. Will the PC version have dedicated servers? Will third parties be able to host ranked servers so Australians can play with low latency? Will we be able to play against Xbox 360 and PlayStation 3 players? It was conceded that these details are still being worked out as the game is still in a pre-alpha state. PC is being used as the primary development platform but the aim is for an equal experience across the board and it's worth noting that Locki was demo'ing the game using an Xbox 360 controller.

Ed: Update: Splash Damage have since confirmed that Brink will definitely have a traditional client/server setup for PC

We might be a bit biased on shooters in the Quake lineage here at AusGamers, but from what we've seen so far Brink is looking very impressive. If what we've been privy to so far is an accurate indication, then it really just might bridge some gaps between the die-hard multiplayer shooter fans and those who would normally just stick to a solo experience. This is one game that we'll be keeping a close eye on all the way up to the slated release date of Spring (Aus Autumn) 2010.

Update: You can now catch even more details and elaboration in our video interview and accompanying Q&A transcript with Splash Damage Creative Director Richard Ham.
Tweet