The ASUS ROG Zephyrus G14 is one of the most talked about gaming laptops of the year for good reason - it packs the AMD Ryzen 9 4900HS mobile CPU in a tiny package.
ASUS ROG Zephyrus G14 Review
Uncharted 2: Among Thieves Preview
Post by Steve Farrelly @ 08:34pm 16/06/09 | Comments
AusGamers was lucky enough to sit through a one-on-one demo of NaughtyDog's forthcoming Uncharted 2: Among Thieves to see just what the notorious Nathan Drake is up to since following in the footsteps of his ancestor, Sir Francis Drake in Uncharted: Drake's Fortune. Read on for our full impressions...


My anticipation for this game is palpable, and rears its head more often than not post-E3; telling my friends (or anyone who'll listen) that NaughtyDog's follow up to my favourite PS3 title, ever, is going to rock the system like nothing else.

So chilling out in Sony's European/Australian press room at E3, I was miffed the game was nowhere in sight, until I saw Dan emerge from behind a Bravia screen with an excitable smile on his face. It seems the game had been tucked far away in the corner, but having discovered it, I dropped the controller I had in my hand and left Heavy Rain a distant memory of a game I'll undoubtedly write about later - as far as I was/am concerned, Uncharted 2: Among Thieves is far more important, and I couldn't get over to the couch behind the massive screen fast enough. 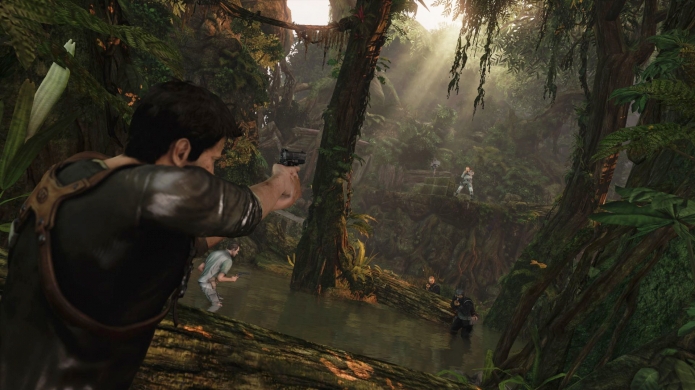 "Drake has really hit rock bottom," says my NaughtyDog demo companion, Neil Druckman (who also happens to be co-lead designer on the game). "He's spent pretty much all of the fortune he gained in the first game, and we're really learning that he's just a thief."

With that in mind, my hands-off demo begins with Drake high atop a ruined Nepalese village; tattered remains of a once liveable community offer up a visual treat in the way of exemplifying both the power of the PS3 in the right hands, and the creative muscle within NaughtyDog's art team. It's a stunning sight, and I'm only looking at the inside of a building.

My demoer moves Drake out to a roof-top ledge to circumvent an eye-sore. I say eye-sore because as soon as Drake shifts his position to clamber along the dangerous looking bypass, the game's camera swings back to reveal a vista of absolutely gorgeous proportions. Below and in the immediate area is more of the decimated town, beyond that are ascending hillsides replete with farm-land and beyond that are the white-tipped guardian walls of the Himalayas. I ask Neil how much of this stunning sight is actually true geometry and I'm amazed when he freely shifts the camera around the scene to show off just how far the environment stretches back. The God-rays lighting up the farmed hillsides become the detailed benchmark, but according to Neil, the closer mountains are also part of the plane, with only some of the Himalayan walls situated as bitmap backgrounds - hella impressive. 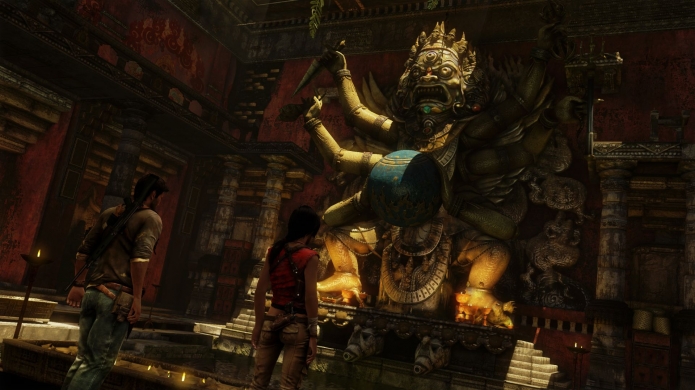 But enough sightseeing; there's climbing, swinging, falling and gasping to be done, and it all rolls out rather quickly once Drake reaches a key point in his clambering destination.

The purpose of the demo then, seems to be to show off the incredible vistas packed within the PS3's powerful architecture, as well as the organic nature of the game's innumerable scripted moments - be it facing off against triggered goons, or merely feeling your heart skip a beat because the sign post Drake just jumped to almost ripped itself out of the wall through tension and added weight.

While the traversing athleticism of Drake is well worth watching, it's the heightened apprehension of staying alive that really elevates the demo when a deadly chopper rises up out of nowhere to let Drake know he's in big trouble. A few death-defying leaps here and there, and suddenly we're also facing off against a host of goons. Thankfully one of the game's new features is a cover and fire anywhere system meaning our hero can hang precariously behind a mounted sign-post, take cover, wait, then pop up, around or under and return fire.

But this is no picnic, and it becomes plainly evident there are no more super safe cover zones in the game. AI is smarter now, and will attempt to outflank you at every conceivable opportunity. What's great about the revamped AI is, like you, they're also reacting - in real-time - to much of the scripted stuff that's creating drama around you. A great example of this was Drake finding a small moment of refuge inside a building only to have this ‘breather' interrupted by not only enemy pursuers, but also a missile-happy chopper. This all resulted in three major things happening: one being that Drake was fighting off the goons who were reacting to his (ie your) actions. Two, the building was now collapsing and falling dramatically into another building. And three, the dynamic AI was now having to react accordingly because of this massively scripted event. This meant they also had to be weary of falling debris or furniture, maintain their footing as the building fell and still attempt to take down Drake (who by the way, escaped by jumping through a window into the other building). 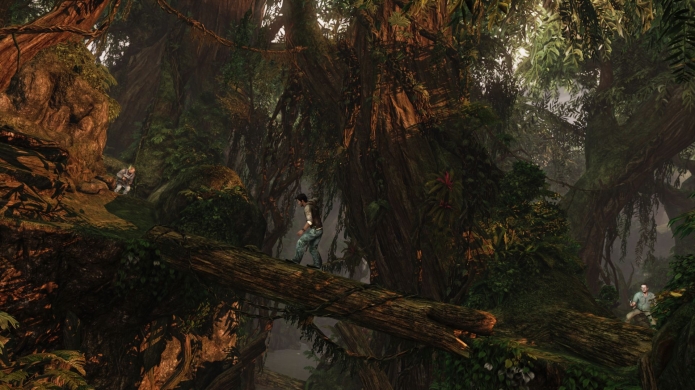 The entire sequence lasted all of about one or two minutes (if you include the skirmish before the collapse), but left a lasting impression on me, and equally offered up a host of innovative design examples, coalesced into one easily digestible chain of events, finishing with a fitting line by the ever-nonchalant Nathan Drake "we were almost in that", in reference to the now collapsed structure.

What I took from all of this though, was that NaughtyDog have really looked at the marriage between film, games, drama, action and gameplay they pioneered with the first outing, and have thoroughly tweaked it for Uncharted 2. Action is far more intense, but carries with it a set of new tools for full recourse. The game's enemy AI is equally revamped, giving you a much more organic combat system, but also comes with options to tactically utilise the environment around you from various new cover mechanics, to tricking the enemy into thinking you're somewhere you actually aren't (so you, yourself can outflank them). Set-pieces are now far more elaborate and memorable (not that they were forgettable in the first game), and will more often than not spell certain doom for you, while the visual feast served up is not only among the best on offer this generation, but clearly the benchmark for all PS3 games to follow.

And what's even more tantalising about all of the above is I really only sat through around eight to 10 minutes of gameplay. There's still so much more we haven't seen, including the all-new multiplayer, a full co-op campaign alongside the snappy scripting and story portions of the single-player mode (of which the first game truly excelled) which will no doubt please thanks to a tight cast of characters (Nolan North as Nathan Drake is perfect casting) and some solid narrative. And much, much more.

For more on the game, NaughtyDog's design philosophy and the technology used, be sure to check out my interview with Neil Druckman, right here. And for more media, screens and information, visit our Uncharted 2: Among Thieves game page.