The ASUS ROG Zephyrus G14 is one of the most talked about gaming laptops of the year for good reason - it packs the AMD Ryzen 9 4900HS mobile CPU in a tiny package.
ASUS ROG Zephyrus G14 Review
Star Wars: The Old Republic Preview
Post by Steve Farrelly @ 02:39pm 15/06/09 | Comments
AusGamers sat through a live demo of Star Wars: The Old Republic showing off the unique additions to the MMO space the game brings. Check out our preview for the full run-down...


It's a huge undertaking to bite into the MMORPG pie these days. What with Blizzard doing all but patenting the field as their own (because they've not only popularised it, but have also set a fairly standardised interface and progression system almost all who follow are adopting), but if you're going to put your knife into said pie to cut yourself a piece, you should probably do it with a forward-thinking and respected development team, and one hell of a popular franchise.

Enter BioWare and Star Wars. Star Wars: Knights of the Old Republic already showed us these two big names deserve to be together, but it's this ambitious MMO all eyes are upon, and with a statement like "we've already determined our game has more content than all BioWare games ever made" from BioWare Austin's VP and co-founder, Gordon Walton, well, you just have to sit up and listen.

Sitting in a decidedly cool set-piece themed from Star Wars: The Old Republic, we couldn't help but feel this was going to be something special. Over the last few months, trickles of media have been pouring out of BioWare Austin, and with the E3 release of the incredible CG intro movie for Star Wars: The Old Republic, it was most definitely high-time we saw some seriously substantial demonstrations of the game's majorly touted features.

Chief among these touted features is BioWare's idea of a more tangible story element that actually offers direct story arc trade-offs based on in-game decisions - an element that hasn't really been fully explored or exploited in the MMO space. There's also the voice-over stuff, where, for the first time ever in a MMO of this scale, full voice support for characters and story have been implemented, obviously equalling 100s of hours of speech (and a huge cast of voice talent).

But beyond concepts of emotionally charging the player, there are also key MMO staples here that not only tether the sheer model of this title as a contender for your hard-earned subscription dollars, but also keep things familiar and moving forward. PVP, item-management, player progression (XP-related), skill-trees, farming, crafting, trading and grinding are all present, and then some - in fact, with all of the staple elements playing nice alongside the progressive elements, it's arguable Star Wars: The Old Republic is the most ambitious massively multiplayer online role playing game ever conceived.

But let's start at the beginning. Taking their foundation from what they know best, The Old Republic has no Darth Vadar, no Han Solo and no Luke Skywalker. In fact, it's set some 3,700 years prior to the big-screen Star Wars you know, and 300 years after the events of KOTOR. Obviously there are two factions to choose from in the Sith Empire and Galactic Republic, each with various classes and both with a few unique classes as well. 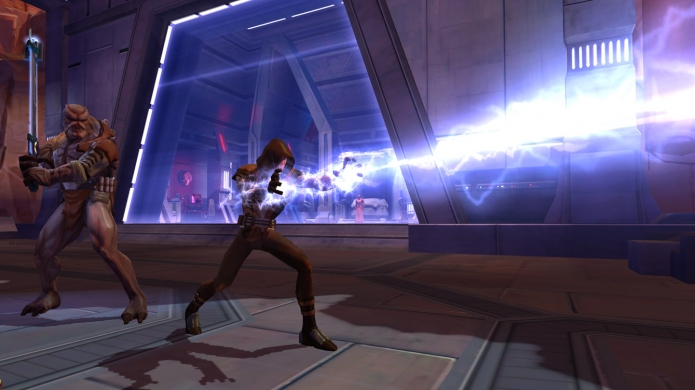 Dallas Dickinson, the game's senior producer, ran us through our first unique class for the Sith Empire, the Bounty Hunter. Like so many other MMOs, you have a host of character creation options, but where things differ here, is in the form of you having a fully voice-supported character with equally voiced support NPCs. Even the alien races in the game actually speak in a fully voiced alien tongue, replete with subtitles (very impressive). Beyond the physical voices though, is the inclusion of BioWare's trademark conversation wheel which offers a number of responses during conversations, each of which go toward your character's reputation and how he or she is treated by other NPCs throughout the game's universe.

Our Bounty Hunter is introduced to the story as a hopeful for The Great Hunt, a competition set up by the Mandalorians to find "the greatest bounty hunter in the galaxy". His quest begins in the first real visual representation of Hutta, a planet inhabited by the Hutt (though they're not native here, like their nature would suggest, they simply came to the planet and enslaved its native inhabitants). There's a murky khaki green haze to the planet thanks to the Hutt's industrial (and waste) influence, giving the planet a very distinct look and character.

We're shown combat for the first time, which is a usual MMO hot bar affair of basic attacks, specials and buffs. Dart guns, rockets, a blaster and flamethrower are all what the bounty hunter doctor ordered, and will go a long way to making this class likely more popular among players than a lot of other classes on offer. 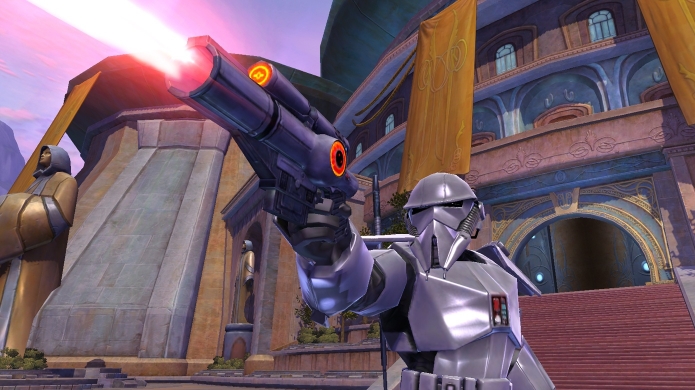 Key to the inclusion of unique classes for both factions is the personal saga attached to each. It's from this baseline story your in-game decisions will have an ultimate affect on what becomes available in future missions, events or items. Your actions are adverse, is the point Dickinson reiterates, and it's this unique MMO first that will prompt players to experience all The Old Republic has to offer with each character and your invariable decision-making based on factors such as class, faction and whether or not you want to be ruthless, neutral or good. It's also pointed out you won't be able to simply regrind a host of class-specific missions because the ensuing story tangent is based entirely on your decision-making and how you want to play the game. Moreover, bounty hunters will not be able to take part in the same saga-specific mission as any other class and vice-versa. This is the case for all personal saga mission lines, and another unique aspect to Star Wars: The Old Republic.

An example of this was shown at the close of our preview session, where Dickinson's Sith character is given an option to kill an insubordinate Imperial Captain or let him live. The choice was ours to make, and so we chose to kill him. This created a series of events (called a "Flashpoint" which other players could join in on) whereby our character was in charge of maintaining order aboard the ship as well as stopping an invasion from Republic Troopers and a Jedi. One of the key rewards here was killing said Jedi, which then gave the Sith character two Lightsabres (seriously, who doesn't want two Lightsabres?), and we were told the events that had just transpired would have been fundamentally different had we let the captain live. And again, this is an event in the game that cannot be played again with the same character - meaning you'd have to create an all-new character to make it there and then make the opposite decision - a seriously tantalising concept in the MMO space.

We also got to have a look at a unique Republic class, the Smuggler. Basically this is your Han Solo class, and he has a few neat, unique tricks up his sleeve. Like the Bounty Hunter class, the Smuggler is a ranged attacker - using grenades and a blaster to take on the enemy, however, unlike the bounty hunter, the smuggler is seriously lacking in armour. To balance this out, the smuggler class has the ability to utilise a class-unique cover system which then opens up cover-specific attacks (such as being able to use thermal detonators); offering a similar yet different combat experience to the Imperial bounty hunter class companion (another example we saw was the bounty hunter using his flamethrower in close quarters combat, while the smuggler used a rather rudimentary kick to the groin followed by an ice cold blaster shot to the head - very cool).

"Heroic Combat" was a battle idea shown off where your character takes on multiple targets with a bit of style, and goes a long way to empowering the player. It's all a part of crafting a "real emotional impact" we're told, and from what we've seen, this is definitely going to be the case.

On a visual level, there's a real element of style here that mixes stylised realism with over-the-top character concepts. The end result is both in keeping with Star Wars aesthetics and videogame accessibility. Star Wars fans will love it, and seeing places like Hutta and Ord Mantel (where our Smuggler class was revealed) were just the tip of the fan-service ice-berg. We didn't even touch on space travel (though we asked about interplanetary travel in real-time and were given a rather revealing nod and smile) or proper space combat, nor was it revealed what sort of level cap we'd be looking at, but given the scale of everything else we saw, it seriously looks like players will be playing Star Wars: The Old Republic for quite some time.

For our video interview with BioWare Austin's Gordon Walton click this link, but if you can't bothered watching a video, you can also check out our full interview transcript right here.